A review of diaphragmatic hernias 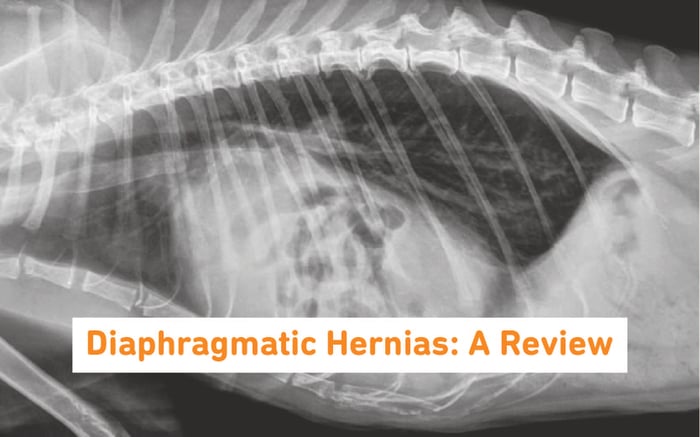 Traumatic diaphragmatic herniation occurs when a forceful blow to the abdominal wall causes an acute severe pressure gradient between the thoracic and abdominal cavities. The resulting diaphragmatic tear(s) occurs in the area which is least protected by the viscera at the time and site of impact. Since the central tendinous area of the diaphragm is stronger than the paired costal, lumbar, and sternal musculature, tears usually occur along the fiber orientation of the muscles (radial tears) or at their attachment to the ribs (circumferential tears).

The liver is the most commonly herniated organ, with the stomach, small intestine and spleen often seen in left-sided tears, and the small intestine and pancreas in right-sided tears. The herniation of abdominal organs through the diaphragm is associated with compression of the lung lobes, progressive atelectasis and pleural effusion. Fluid accumulation may occur as result of intrathoracic hemorrhage (often self limiting) or organ entrapment and accumulation of transudate due to impaired venous drainage and increased capillary hydrostatic pressure within the entrapped organ. The result is significant loss of functional lung capacity and development of ventilation:perfusion mismatch and shunting.

The clinical signs of diaphragmatic hernia vary from none to severe respiratory compromise and shock. While animals with recent traumatic diaphragmatic hernias frequently present in shock, others may go undetected following trauma and may not be diagnosed until days to weeks after the injury. One study suggested that as many as 15-25% are diagnosed weeks after the injury.

Respiratory compromise, while not always evident, relates multifactorially to the presence of shock, chest wall dysfunction, the presence of air/fluid or viscera in the pleural space, decreased pulmonary compliance, edema and cardiovascular dysfunction.

Other helpful clinical signs include muffled heart and lung sounds, thoracic borborygmi, and “tucked” (empty) abdomen, or “missing” organs upon abdominal palpation, but are variably present. In addition, cardiac arrhythmias are present in approximately 12% of small animals with diaphragmatic hernias.

Definitive diagnosis of diaphragmatic hernia usually is made by radiography or ultrasonography.

The most common radiographic findings are loss of the diaphragmatic outline, masking of the cardiac silhouette and displacement of the lung fields. Identification of abdominal organs within the thoracic cavity makes the diagnosis of diaphragmatic hernia uncomplicated, however pleural effusion is present in 20-25% of cases (often associated with chronic liver herniation) making the diagnosis less obvious. Repeating radiographs following thoracocentesis and/or performing radiographs in different views (shifting herniated organs to allow better visualization) may assist with the diagnosis in such cases.

Thoracic radiographs of animals with PPDH will show an enlarged cardiac silhouette due to pericardial effusion and/or entrapment of abdominal viscera within the pericardial sac.

Ultrasonography has also proven useful when herniation is less obvious radiographically. A straightforward diagnosis occurs when there is identification of abdominal viscera next to the cardiac silhouette, or if there is disruption of the lung-liver interface.

Moderate to severely compromised patients can deteriorate further during the stress of handling, and for this reason it is recommended to stabilize for shock and respiratory dysfunction before diagnostic imaging is performed. Preoxygenation and minimal restraint is recommended with the least stressful projection performed first, and additional views being added as required to confirm /rule out the diagnosis. 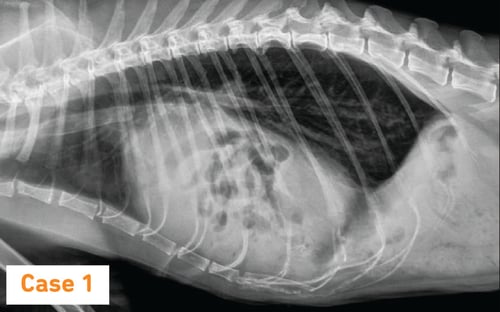 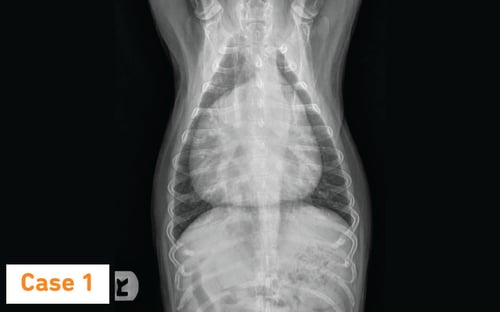 Right lateral (A) and ventrodorsal (VD; B) thoracic radiographs of a cat and dog with peritoneopericardial diaphragmatic hernias. Notice the pronounced large, round cardiac silhouettes with gas filled hollow visceral organs. The conspicuity of the gas (or ingesta) containing viscus may be a function of body position during radiography. Solid parenchymal organs, unless surrounded by omentum, are difficult to distinguish as separate structures within the pericardium. Other radiographic signs of PPDH include the dorsal peritoneopericardial mesothelial remnant between the heart and diaphragm and varying degrees of indistinguishable border of the ventral thoracic diaphragmatic surface and the caudal ventral cardiac silhouette. 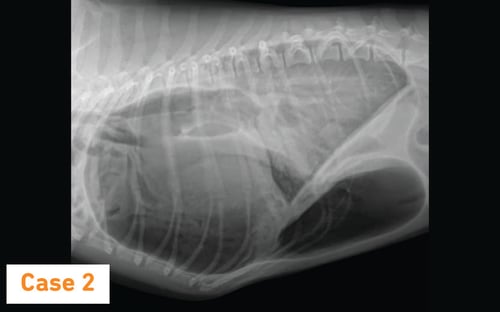 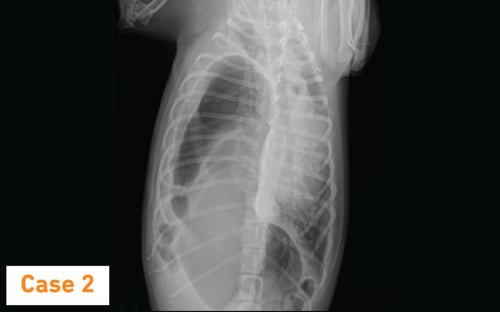 A lateral and ventrodorsal views of the thorax of a dog with a traumatic diaphragmatic hernia of the stomach and small intestines. The gas-filled stomach is herniated into the left hemithorax, displacing the heart and lungs to the right. 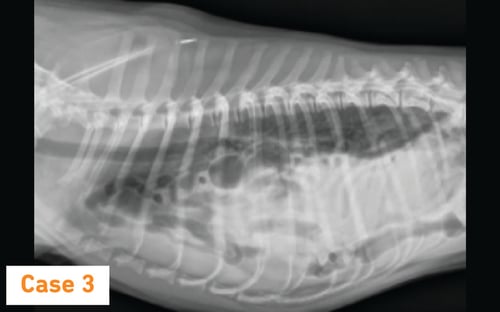 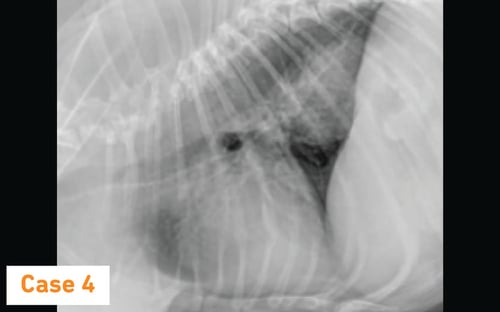 Stabilization includes shock therapy, oxygen supplementation, and potentially thoracocentesis or pericardiocentesis. Prophylactic antibiotics should be given before induction of anesthesia in patients with hepatic herniation (massive release of toxins into circulation may occur with hepatic strangulation or vascular compromise).

Unsurprisingly, these patients represent a significant anesthetic risk and the timing of anesthesia and surgical correction may have an important effect on the outcome of treatment.

Mortality rate following surgical repair was formerly believed to be higher if surgery was performed less than 24 hours following injury (due to the cardiopulmonary compromise as result of lung contusions), which led to some clinicians delaying surgery when possible. In contrast, other reports regard patients with traumatic diaphragmatic hernias as inherently unstable and advocate surgical intervention as soon as life-threatening conditions have been resolved.

The timing of surgical repair depends upon the extent of the initial cardiopulmonary dysfunction, the presence of or absence of organ entrapment, the degree of compromised pulmonary function, and whether or not the animal's condition is improving, stable or deteriorating.

Emergency surgery is indicated if there is evidence of gastric herniation or if the animal's respiratory status deteriorates. Gastric herniation is a surgical emergency because these animals are at risk for acute gastric distension, severe respiratory compromise, and death.

In contrast to traumatic hernias, conservative management is an option for animals with PPDH that have no clinical signs, however there is always the possibility for development of life-threatening problems.

Although surgical correction of diaphragmatic repairs is commonly done in general practice, when needed, referring these cases to hospitals with a dedicated anesthetist and means to measure airway pressures and intensively monitor these patients is by far the ideal standard.